I’ve found it! That pasta dish that is sinfully decadent but doesn’t make you feel toooooo guilty because… it has a vegetable in it!

While waiting in line at a store on Friday, I flipped through the current issue of Food & Wine magazine. Side note, is there anything better than flipping through magazines while waiting to check out at a store?! It’s a blissful break. Please relay this to my husband.

Anyways, John Besh’s recipe for Cauliflower Mac & Cheese was featured, my eyes got big, my stomach growled, and I knew I had to have this dish before the weekend came to a close. The season is changing, it’s getting a little chilly, and that is the perfect time for a rich, comforting baked pasta dish. {I could probably make that argument for any season though….} 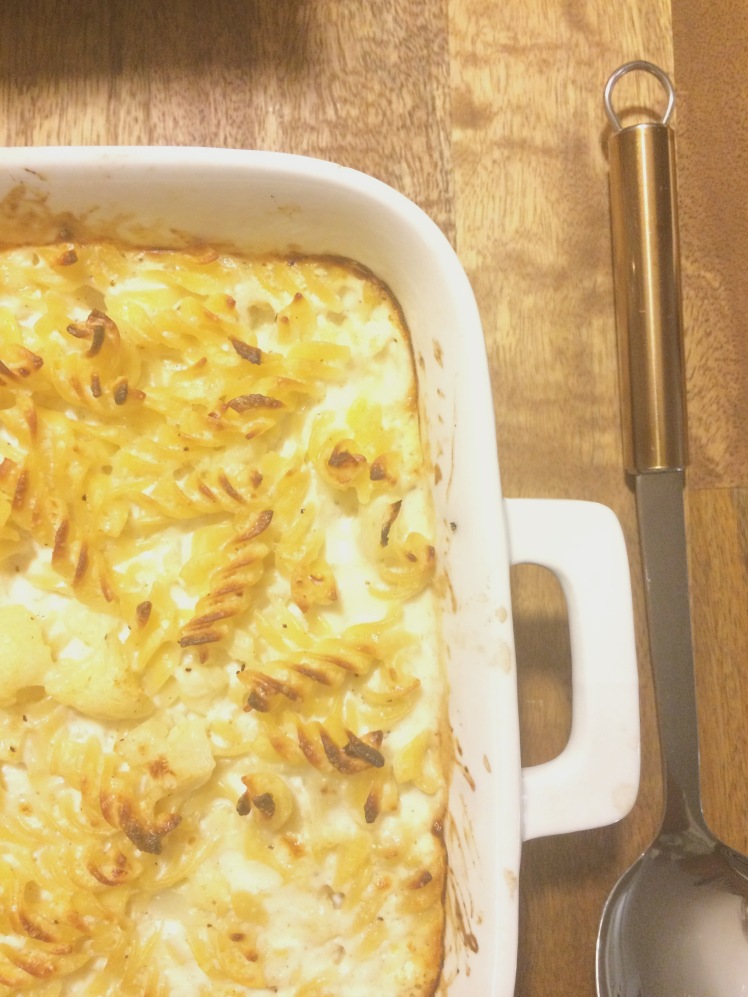 Although cauliflower is far from being my favorite veggie, it still counts as a vegetable therefore making this dish a little bit less regretfully indulgent. Plus, nutmeg + cauliflower is one of those classic couplings ranking up there with peanut butter and jelly, beauty and the beast, and brittany and justin {yeah, I said it.}.

To avoid going to the grocery store, I tweaked the recipe a bit. I’m sure John’s ingredients would be even more delicious than mine – but I’ve listed both anyways!

COOK
Pre-heat oven to 375 degrees and butter {or olive oil} a 3 quart dish.

Bring a large pot of salted water to boil. Boil the chopped cauliflower florets about 3 minutes. Then use a slotted spoon to transfer the cauliflower to the prepared baking dish.

Add pasta to the boiling water, cook according to package but pull about 1-2 minutes early. Drain.

While your pasta is cooking, in a separate large sauce pan melt the butter. Add the flour, stir and cook for about 2 minutes. Gradually stir in the milk whisking to remove lumps. Bring to a boil and then a heavy simmer for 15 minutes. Check on it from time to time, and give it a stir to prevent anything from sticking or collecting at the bottom of the pan.

Remove the milk mixture from the heat, add in the ricotta or cottage cheese and nutmeg.

Add in the cooked pasta and stir to coat.

Then add the Gruyère (given the chance, I would always choose Gruyère over mozzarella. Over anything, really), season with salt and pepper and mix well, but gently. This would be a good time to taste test and then add salt,pepper, nutmeg to your liking.

Pour the cheesy pasta over the cauliflower – stir to incorporate if you’d like – then bake for 20 minutes.

After baking for 20 minutes, broil for about 4-6 minutes until the top is crispy and brown. Never leave a broiler unattended, too unpredictable! 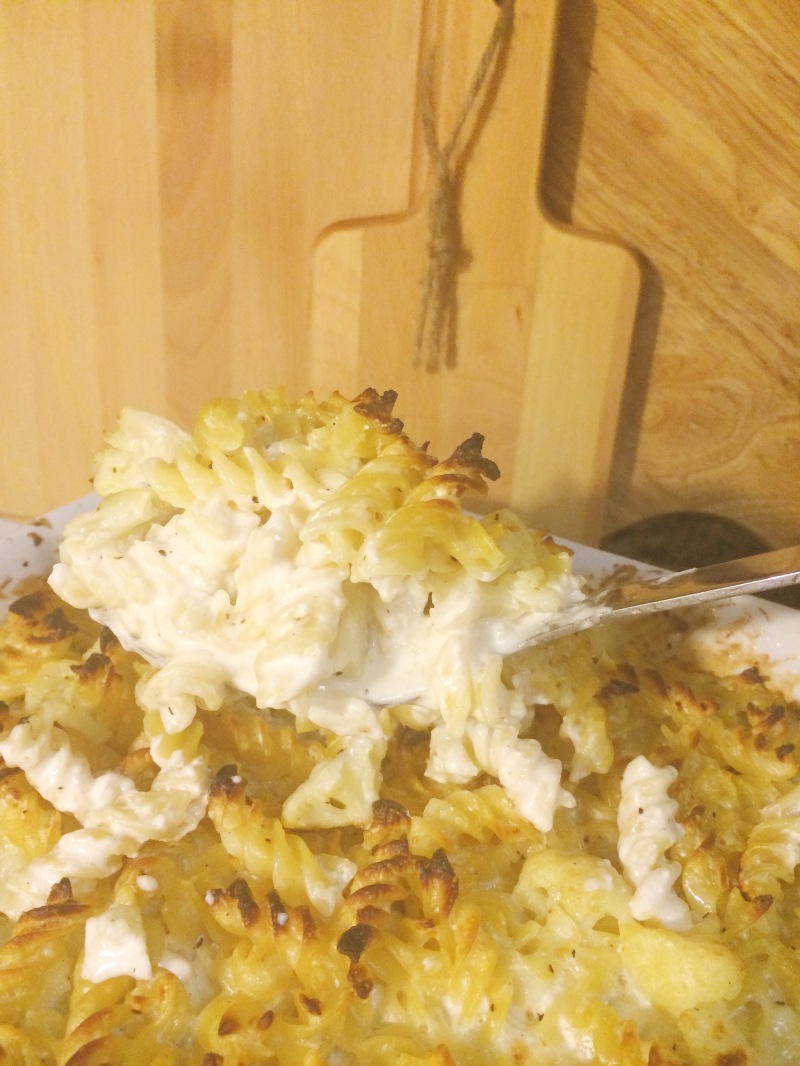 This would be amazing for a dinner party, a potluck, a side to a beautiful roast, or on its own for say a growing family of two that is constantly hungry 😉 {p.s. baby was a big fan of this dish!} It could probably even be made ahead of time, heated up and broiled before serving!

I’d love to hear about your experience with this dish if you give it a try! It’s a new all-time favorite in our home! 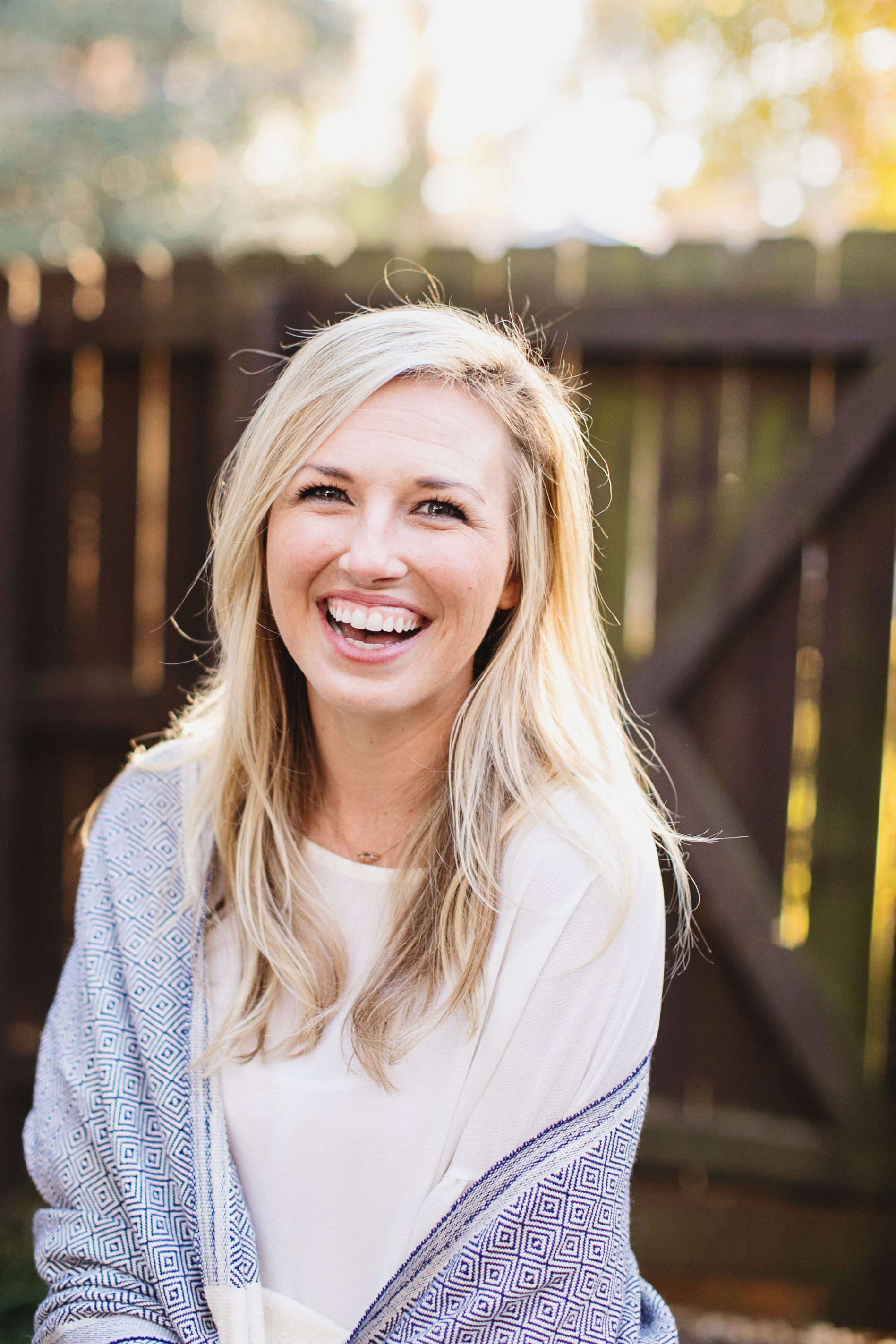 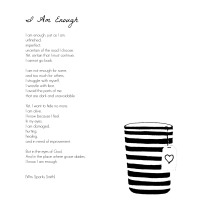 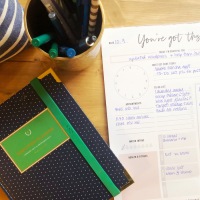 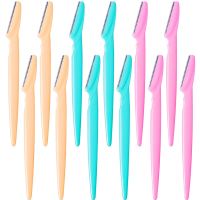 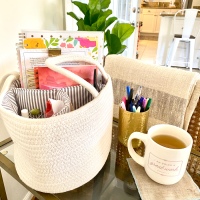 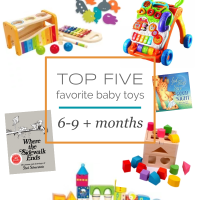