Some of my very favorite date nights with Josh are simply a bottle of red wine, a print-out of a recipe, a red box movie and an expensive trip to Publix.
That is just what we had this past Friday night. As I kind of hinted at earlier, our lives are changing rapidly and sometimes we have to deal with some crud. Friday was one of those days so I decided that I could possibly cheer up my Josh with a big ole homemade meatloaf and an even bigger hug 🙂


And that is just what I did. 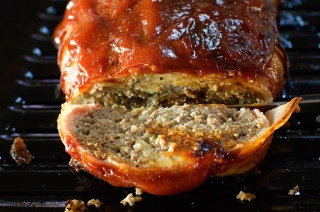 {the pioneer woman’s pic… we were too hungry to take pics once that sucker was out of the over}
Remember how I said a good date night involves a print-out of a recipe? Well, I left mine on the printer, so me and Publix just had to wing it. And then….me and the cooking process just had to wing it too. Whatever, it worked.
First, I sauteed a beautiful big vidallia onion with lots of garlic, once it was feelin’ good i added in 1 chopped green bell pepper and 1 chopped red bell pepper. {In case you don’t know, this is a super big deal to me, usually me and peppers aren’t friends, but in the name of love…}

so all of these pictures are terrible horrible very bad. So, i picniked them to look old fashioned, because i have decided that meatloaf is old fashioned. That’s my story and I’m sticking to it.
Once the veggies were sauteed I added them to: 2 pounds of a mixture of pork and beef, some torn up bread, more garlic, parsley, seasoned salt and other seasonings, lots of worchestershire {my second love to Josh}, parm cheese and egg yolks.

{that looks super yucky doesn’t it?}

Then the best part. I bundled that loaf of meat up in a bacon blanket. I used an entire package of bacon and made sure to tuck it in tightly on the sides. Then I told the meatloaf a night time story, we said the Lord’s prayer, I kissed it on it’s forehead and sent it into the oven.
350 degrees, 30 minutes
In the meantime {well, those 30 minutes} we drank wine, talked about our days and whipped up the most delicious tasty glaze/sauce for our baby bundle of meatloaf.

Wisk together {or use a fork if you are making this at the home of boys} lots of ketchup, brown sugar, plenty of hot sauce and worcestershire, just keep tasting it until it tastes how you want it to taste. For me that was tangy and sweet with some heat. Brush some of that magical sauce onto the meatloaf for its last 15 minutes of baking and it will turn into a most wonderful glaze.
15 minutes later, ask yourself “how do the little piggies eat?” and gobble that manly meatloaf up
manly meatloaf makes the world go round 🙂 amc 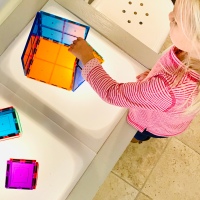